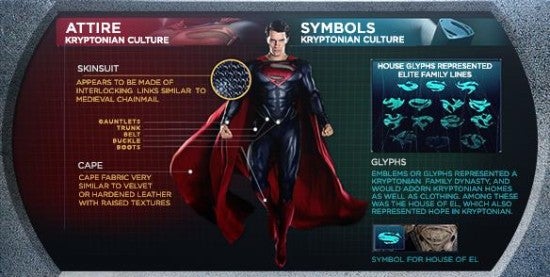 Ahead of next week's release of Man of Steel on Blu-ray, DVD and digital download services, Warner Bros. have released a snazzy new infographic, culled from information revealed at the recent launch of the Learn About Krypton viral site. You can check the image out below (click on it for a slightly larger version). The graphic gives a rundown of much of the key information about Krypton revealed on the site, albeit without the embedded video that teases things like LexCorp and S.T.A.R. Labs becoming part of the DC Cinematic Universe going forward. It looks at the sigils of the various houses of Krypton, including the House of El, from which Superman's emblem is derived; compares Earth's sun to Krypton's Rao; looks at Kryptonian weaponry and spacecraft; and explains the look and feel of Superman's costume. Check it out below; Man of Steel hits Blu-ray and a host of other formats on Tuesday.

Man of Steel Infographic Teaches You About Krypton