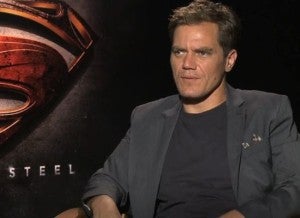 Everyone want to know what villain Superman might fight next in either a Man Of Steel sequel or a Justice League movie, but what does the future hold for General Zod? In a new video interview, Jake Hamilton asked Michael Shannon, who plays Zod in Man Of Steel, which superhero would he like to see his character face off against next. Without hesitation, Michael Shannon responded, "Aquaman."  Shannon continued, "Zod versus Aquaman. Nah, I've been wondering when they are going…have they ever made an Aquaman movie?" Hamilton explained the closest they had ever come to an Aquaman movie was the fake James Cameron movie in Entourage. Shannon laughed, "Ultimately it would be Zod versus like a bunch of sea creatures that Aquaman talked to, while Aquaman's hiding in the corner." The Man Of Steel will be released in movie theaters across the United States on June 14, 2013.