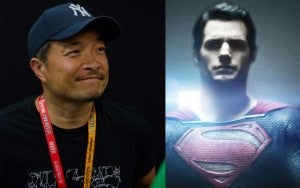 As we've previously reported, several Warner Bros. executives have already seen the Man Of Steel. In some recent TV interviews to promote Free Comic Book Day, DC Comics Co-Publisher and superstar artist Jim Lee professed to being one of the executives who has already seen the Man Of Steel. So what did Jim Lee think of the movie? Well, the Man Of Steel made him cry, but in a good way.  In an interview with CBS in New York, Jim Lee said, "I've seen the movie. I've seen it, that's one of the perks of getting to work at DC Comics is that we get to see these kinds of things. It's an amazing re-imaging of Superman. There's stuff in there that you've never seen in a Superman movie before. The special effects are incredible, but it's got a lot of heart. It really brought me to tears actually, a couple of times in the movie and that doesn't happen a lot." In another interview with CBS, Jim Lee also said, "It's epic. It's got a lot of heart, but one of the things that was kind of missing from the last Superman movie I think was the action, and this movie has it in spades. I mean it is a visual thrill ride. It is amazing. You get to see all the powers of Superman, and in all its glory, and I think people are going to be blown away." Man Of Steel is scheduled to open in movie theaters in the United States on June 14, 2013.