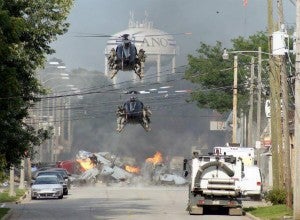 A new photo from the forthcoming Zack Snyder Superman reboot Man of Steel has arrived online, courtesy the movie's official Facebook page, and it seems to show a substantial military presence in Superman's childhood hometown of Smallville. "Stuff is going down in Smallville! Will the military be friend or foe?" The Facebook page asks. The caption reads, "Photo by Bill Roberts EXCELLENT photo of the military action in Smallvile! Absolutely great! Thanks Jane for sending it!" Of course, fans have seen footage at Comic-Con that already set up the idea of Superman being at odds with the authorities, so it's probably the scope of the damage more than the role of the military that's a surprise. This may he a high-quality photo taken by a local and not an actual set photo, though; in spite of appearing on what appears to be an official page for the movie, the water tower in the background appears to say "Plano." Of course, Facebook also doesn't have the verification icons like Twitter does, so it's impossible to say whether it's a Warner Brothers site or just a very well-run fan site. In any event, it appears as though Smallville is depicted at least in part by Plano, Illinois.

Man of Steel Photo Shows The Military in Smallville