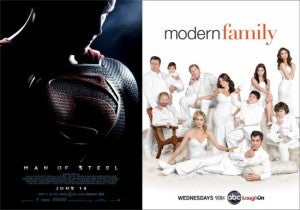 According to rumors circulating through social media, there will be a special look at the Man Of Steel during tonight's episode of Modern Family. Reportedly, a promo announcing the Man Of Steel special look ran during Monday night's episode of ABC's Castle. Of course, no one has any idea exactly what special look means. It could just be a scaled down version of one of the trailers, a brand new commercial, or an actual clip from the movie. Also, we've been unable to confirm the Man Of Steel sneak peek through any official source. Usually, something of this nature would be teased by either Warner Bros. or ABC via social media. We can't help recalling how MTV initially announced Henry Cavill would be appearing during the MTV Movie Awards, but it turned out not to be true. It is somewhat unusual that a Man Of Steel special look would air on an ABC show, since ABC is owned by Disney, which also owns Marvel. One would think that Arrow on The CW might be a more likely show to air a special look, but Warner Bros. could just be targeting Modern Family to reach the most viewers possible. We'll be watching Modern Family just in case, and we will add the special look to this post if it actually airs and is released online by Warner Bros. Modern Family airs on Wednesday, May 1 at 9 PM ET on ABC. Update: The Man Of Steel special look did indeed air, but it was just a scaled down version of Man Of Steel trailer #3. 2nd Update: But there was a second commercial with some brand new footage, which we've embedded below.