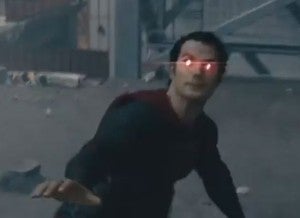 Through the Man Of Steel trailers and TV spots, we've seen Superman use a couple of his different super powers. We know that Superman will have super-strength, be able to fly, use heat vision, and also apparently have super hearing. The Man Of Steel: Superman's Superpowers children's book also reveals that baby Clark Kent will have a super scream that can break glass. But what other super powers might Superman display? According to an interview with Collider.com, Man Of Steel writer David S. Goyer revealed that Superman will continue to develop more super powers the longer that he stays on Earth. Superman will likely even be displaying some new super powers not seen in the movies before. Judging from Goyer's comments, it sounds like the new super powers will be from the comic books, but it's also possible that they were developed just for the Man Of Steel movie. David S. Goyer said, "He's got a pretty deep rolodex.  So, I won't say that we incorporated all the things we know.  We handle a lot, and I'm pretty sure we're depicting a couple in this movie that haven't been seen on screen before, maybe.  I'm not positive.  I think our approach would be he might develop more as he goes on.  We kinda came up with the approach the longer he is on Earth than the more exposed to our sun and our atmosphere, the more things he might develop." Any guesses on what new super powers might show up in Man Of Steel? Man Of Steel is scheduled to be released at movie theaters in the United States on June 14, 2013.