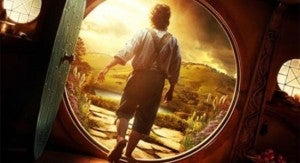 Warner Brothers and Legendary Pictures have taken over Hall H for the next two hours and change for a celebration of their upcoming slate, including Man of Steel, The Hobbit: An Unexpected Journey and Pacific Rim, all of which have had a huge representation here at Comic-Con, with props, posters and buzz on the floor and at other panels. ComicBook.com will be liveblogging it to bring you up-to-the-minute coverage of the story. They've started already, showing some CGI test footage from Pacific Rim. It's simple, but it looks pretty awesome showing on the gigantic screen that's been revealed behind the Hall H curtain. It's a bit like the Star Wars ride at Disney, where it's designed to look like a control console through which you can view wahtever else is projected for the panel. Director Guillermo del Toro is taking the stage to a huge response from the crowd. He's not unfamiliar to Comic-Con guests, of course, having worked on films like Hellboy and Pan's Labyrinth before. As he gets settled in, we're seeing mech-suits like the ones we've seen on the floor of the convention moving and shooting and fighting over sci-fi landscapes. They seem to have resolved the Judge Dredd problem by having helmets with transparent faceplates so that big-name actors' familiar faces aren't "wasted" on the film. The suits are fighting in the rain and in spite of clearly a lot of CG, the way the characters are moving makes it look like this is mostly the actors' performances and not fully CG characters and the like. A Navy ship is overtaken by a wave, which is less impressive than it could be only becuase the effects aren't final. The cast is taking the stage as the footage starts to loop, and it's a good-sized group. Charlie Day, Ron Perlman, Charlie Hunnam and Rinko Kikuchi all show up, and they're almost immediately into talking about Perlman's dramatic Make-A-Wish performance earlier in the week as Hellboy. Rinko is jittery about attending his first Comic-Con. ...And we're off with the first clip being played right now! Del Toro says it's a trailer, so it's likely to be released later today. The director says that in the context of the film, pilots are being used to control giant robots who look like monsters and were having a pretty brutal battle in the clip. The robots, called Jaegers, are controlled by two pilots each, and the pilots each take a side of the robot, so that if one guy dies, the other side of the robot can keep fighting. But he oughtn't try, becuase the whole reason there are two is that one guy would be incinerated by the energy surge from the machine. Del Toro says that we'll get to see that in the film. The pilots, using some kind of metal detector or radiation meter, come across a small item that looks like a statue and one looks off to the horizon, looking scared. A Jaegar is heading toward them until it collapses; a monster is seen attacking a bridge, and it's a horrible six-armed monster that we don't really get a good look at. There's a definitely animated quality to the film, and Del Toro calls it "robot porn with lots of robot on kaiju action." "To fight monsters," says the ad, "we created monsters," and to that end there will be nine monsters and seven robots in the movie. Idris Elba, familiar to this kind of thing from his recent turn in Prometheus, delivers a rousing speech to the troops, presumably before they head out to do battle with the kaiju. It ends with "today, we cancel the apocalypse!", which just seems like a great, quotable line if the movie becomes a big hit. The lights come up and it's apparent that the footage is hot off the presses, since the actors say they haven't seen any of the movie actually edited and ready to go yet, so they're as excited for it as everyone else is. Del Toro was going for a realistic feel with the film, in spite of the CG look to some shots. He says he intentionally set up the shots so that there wasn't a really great view of the robot, making it look cramped and awkward and imposing. He also says that there's no breaks in the movie; if a monster is onscreen, it's attacking. It'll also be a more realistic kind of combat; "f--k that s--t," says Del Toro about movies where one action hero can take down an advancing army becuase they all go after him one at a time. He also says, "we have monsters up the wazoo," including three sea monsters and at least one flier. But they aren't his takes on classic legends; when asked by a fan if there were any "classic" monsters, the director indicated that there was only Perlman. That concludes the official Pacific Rim portion of the panel; odd that the cast didn't really have more to say, but maybe it was the Q&A nature of things, things were directed at Del Toro. I didn't catch who, but someone is introducing Man of Steel as "If Zack Snyder and Chris Nolan had a baby and named it Kal-El." 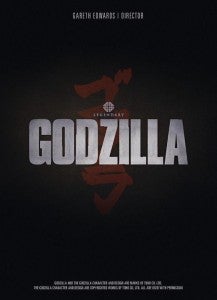 First, though, for those who like their monsters--a surprise trailer for Legendary's Godzilla remake! This Godzilla has more of an original look than the more recent incarnations. The voice over of the trailer uses Robert Oppenheimer's famous quote when describing the nuclear bomb... "I am become death, destroyer of worlds." As a topper we have the surprise guests Will Farrell and Zach Galifianakis promoting their new film, The Campaign. Cars advertising the film with their faces plastered all over it like campaign vehicles have been spotted around the convention area. The trailer has gotten a great response (with some new footage) from the audience in the packed convention hall. As the trailer ends Zach and Will start singing Happy Birthday. Zach answers the "What real life political incidents do you find funny?" question with "The entire Bush administration" - Will concurs. Will Farrell tells us that the city that The Campaign is set in is a fictional one. Will also claims, humorously is that he thought San Diego was a fake city as well. Someone from the audience that Zach says looks like Rachel Maddow asks both of them to do an impromptu campaign speech... they're complying. With the end of The Campaign, Man of Steel opens and Zack Snyder takes the stage with Superman logos changing from steel to red. Zack tells us that shooting is done and the film is in post-production. He tells us we're going to see a tougher Superman. The full teaser trailer will be shown before The Dark Knight Rises. Different tougher Superman, and a different look than we've seen from other films. Footage shown has quick shots of Smallville, farms, Kent as a child wearing a cape. More of the farm, cutting back and forth during different types of his life - the ship crash, teenage Clark saving a bus, holding a metal S. More quick flashes - Amy Adams as Lois, Clark saving someone from a fall off a building and finally the costume. Seems to be teasing the whole thing - now showing Superman in costume seemingly with handcuffs. Looks like (as always) there will be a big fight sequence near a bank - as Superman is being thrown into a vault door. Henry Cavill has now taken the stage. 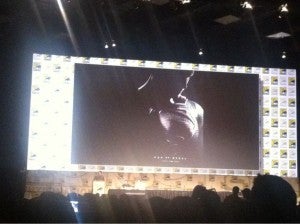 Snyder says the film comes from many different comic storylines. The look and feel of the films that Snyder does, not with the exact feel as 300 but still a much darker look than the previous films. During continued showing of the teaser there's a quick flash of Zod and it seems that there are at least one person outside the family that knows that Clark has some sort of powers. Even with the flash of Zod, Snyder is not admitting that he will be the villain. "Whoever he is he'll be super-relatable" At left, find a pic of the Man of Steel teaser poster, courtesy ComingSoon.net. For those of you at the convention in San Diego they'll be giving away posters at the signing booth. And that ends the Superman part of the panel. Now onto The Hobbit. Production/behind the scenes videos bring cheers from the crowd as the different characters appear. Stephen Fry gets the biggest cheers. Peter Jackson takes the stage and is going to show some actual footage - the soundtrack is just a place holder for now. The footage begins with the dwarfs gathered at Gandalf's house for dinner and transitions to an explanation that there are a lot of people considering stealing Smaug's treasure since he hasn't been seen in so long.  They need a key to enter, though, which Gandalf possesses. They want Bilbo Baggins to be the one to take it, though, since he'll be harder to detect when he attempts it. There are a few intense moments, as well as a great bit of dialogue: "What if it's a trap?" And Gandalf's reply, drawing his sword, "Turn around and go back. It's almost certainly a trap." As seen in the teaser poster, there's a bit of the Gollum-in-a-cave chapter from the book, which makes sense becuase it means that the three characters at the heart of what moviegoers know about the story--that's Bilbo, Gandalf and Gollum--are principal players in the promotional campaign. We see Evangeline Lily for a moment, too, but only a moment. the filmmakers say she'll be named Tauriel. There's a rapid series of sequences, that both services the theme and actually contains the explicit comment that simple folk and ordinary deeds keep the darkness at bay. It's impressive and epic; it feels like it belongs with the rest of the Jackson films. The lights come up and the cast and crew--including surprise guest Elijah Wood--are onstage. Wood had to make his own nametag, since he was just pulled into the room when someone realized he was here at Comic-Con for the Wilfred panel that FX put on. Jackson says he's headed back tomorrow to shoot his cameo for the film, although he had previously said that the first movie was already in the can, so it's possible he'll only appear in the second half of the split book. A question from the audience about whether fans can look forward to a Silmarillion movie is met with doubt, as the property is owned wholly by the Tolkien Estate. While Jackson admits he hasn't really figured out how to make short movies yet, he says it's still not clear whether The Hobbit will get an Extended Cut as did Lord of the Rings. Presumably it will depend on what he has to leave on the floor for the theatrical cut. Andy Serkis joined the panel at the last minute, and when a fan asked him to do the Gollum voice, he got into an argument between himself and Gollum about whether or not he should do it. Good stuff!