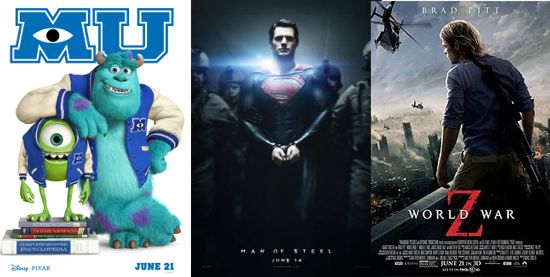 In 2013 so far, there have only been three films to hold the top spot at the box office for more than one weekend. Oz The Great And Powerful, Iron Man 3, and Fast & Furious 6 all won both their opening weekend as well as their second weekend at the box office. Man Of Steel dominated the box office in its opening weekend, but will the film hold on for a second weekend? Unfortunately, the odds are not good for Man Of Steel, as the film is facing much tougher competition than any of the other three films that won their second weekend faced. Man Of Steel will likely finish between $40 million and $60 million for its second weekend at the box office, which would be enough to win most weekends. However, the Man Of Steel will be facing off against both monsters and zombies. Pixar's Monsters University has gotten great early buzz, and forecasts are indicating it will do in the $80 million range. We actually wouldn't be surprised if it does even better than forecasts and finishes close to $100 million. Regardless, Monsters University should easily win the weekend box office. World War Z is a much bigger question mark for the weekend. Brad Pitt has been aggressively promoting the movie, but most forecasters are still pegging it only to do in the $40 million to $50 million range. World War Z will likely put up a close fight with Man Of Steel, but we're predicting that Superman beats zombies.

Man Of Steel To Face Off Against Zombies And Monsters