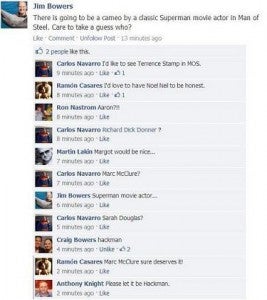 An actor who starred in one of the previous Superman film outings will reportedly make an appearance in Man of Steel, according to a blogger who runs a Superman fansite. Jim Bowers, the force behind Caped Wonder, posted to his Facebook page that "There is going to be a cameo by a classic Superman movie actor in Man of Steel. Care to guess who?" The thread, which you can see at left, features a number of Bowers' friends and followers guessing at the answer but no confirmation from Bowers was forthcoming. The thread found its way to Comic Book Movie, who report that "people were told to think outside the box as who the cameo will be, and that Bowers had a hand in getting the person the cameo." Who would you like to see make an appearance?