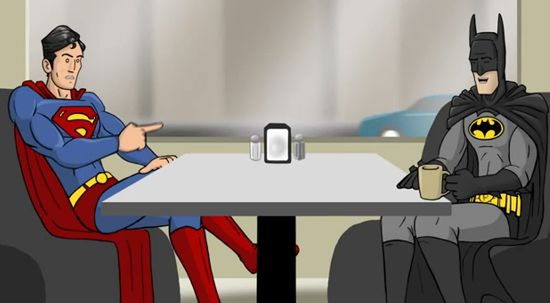 From the same guys who do those great "How It Should Have Ended" videos comes a brand new parody video featuring Batman and Superman discussing the new Man of Steel trailer. As Superman and Batman enjoy a cup of coffee together, Batman compliments Superman on his sweet trailer. Why did Batman like the trailer? Apparently, Batman got misty eyed over seeing Christopher Nolan's name on the screen. However, Superman disagrees that Nolan's name was the only reason that people were excited by the Man of Steel trailer. Our favorite line though is when Batman tells Superman that people might be excited because Superman hasn't been in a great movie since 1980. In just a day, the video has already racked up over 300,000 views on YouTube. Man of Steel is set be released in theaters on June 14, 2013.

Man Of Steel Trailer: What Does Batman Think?