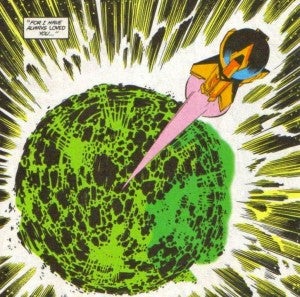 Could the producers and writers of Man of Steel be ignoring fifty years of comics and film convention and returning to some elements of Superman's origin that haven't been used in decades? In this week's Empire Magazine, Man of Steel writer David S. Goyer, director Zack Snyder and actor Henry Cavill were among those interviewed as part of a sprawling feature on 2014's comic book movies that we've been covering in bits and pieces for the last few days. Looking over it again, though, something stuck out to us. "It's interesting that he doesn't know how he flies," said Goyer in the interview. "He didn't grow up on Krypton." This raises an interesting question: could the Krypton of Man of Steel be, as it was from around the time of its inception throughout much of the Golden Age. Later versions of the stories changed this to reflect a race that was only "super" on other worlds where gravity and other factors worked to their benefit. It is, of course, not impossible that it could be that Kryptonians weren't "super" on their home planet but that it was widely known that they would be elsewhere. Advanced science on the planet could provide them with this knowledge, or at least with untested theories to that effect. Historically, the holograms, crystals, computers or whatever it is that Kal-El has been left by Jor-El have played a key role in Superman's screen depictions, with Clark Kent generally being unaware of his origins until he's taught by his biological father by proxy. Jor-El has typically been depicted as having awareness of the effect being marooned on Earth would have on Kal-El, but that has often been seen as more of Jor-El's farsightedness, and not general knowledge on Krypton.

Man of Steel: Were Kryptonians a Race of Supermen?

Zoe Saldana Reacts to First Avatar: The Way of Water Screening: "I Was, Like, Sobbing"