There are hints of a number of comic book stories... Man of Steel by John Byrne may not exist in continuity any more, but the approach to Superman and many of the themes explored in this miniseries and the generation of Superman stories that followed it are pretty evident in the trailer, not least of all an oft-repeated scene where Superman becomes overwhelmed by everyone in the world always calling out for help and has to be consoled by Jonathan and Martha Kent.

The stories that started after the Crisis on Infinite Earths and ran until 1999 (although there was more of an official change of approach in 2005's Infinite Crisis). The more personal approach to Superman inspired Smallville and the way many viewers perceive of Superman today. It was also the first time we got a real Batman-esque approach to Superman, wherein fans got to see Clark Kent traveling the world, trying to figure out both his place in it and the limits of his powers. We're likely to see bits of that interpersed into stuff from Superman: Secret Origin by Geoff Johns and Gary Frank. Ironic, since Frank was always taking flak for doing his best to make Clark/Superman look like Christopher Reeve. More on that later. The Kryptonian criminals are a whole other story. While the post-Crisis, pre-Infinite Crisis version of the DC Universe did feature those characters, it's unlikely we'll see that version take the stage. Superman's decision to kill them and the fallout from that decision was some strong storytelling, but it works a lot better in serialized format and it's not exactly action-packed. Expect something more like the Superman II or Smallville interpretations of the characters, and the Geoff Johns/Richard Donner Action Comics stories that were inspired by Donner's original look. 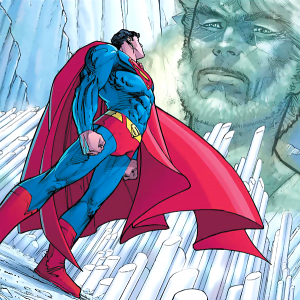 That makes sense, given the fact that Adam Kubert's redesign of Jor-El is clearly the basis for Russell Crowe's look in the movie (with maybe a little bit of Birthright or Secret Origin thrown in for good measure). Will we see a lot of the Donner/Johns stuff influencing this film, even though the filmmakers are nominally trying to escape Donner's influence over the previous films? Doesn't seem entirely unlikely. That said, War of the Supermen/World of New Krypton seems to be the more likely basis for some of the interaction with Zod and his cohorts, especially if it turns out that there really is a Black Zero military unit trying to follow him out of the Phantom Zone/Black Zone in the flick. Will we see any influence of the New 52? The costume really doesn't count because almost anyone could have guessed that our next big-screen Superman would be the one without his shorts on the outside regardless of how he looked in the comics at the time. Other than that minor detail and the darker coloring on the cape (which is inconsistent from one colorist to the next anyway) there really aren't any big similarities in the costume. 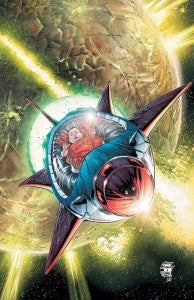 The notion that Superman is considered a threat by the government and widely disliked or distrusted is one that's popular in the New 52 in a way that it never really has been before in the mainstream continuity of the comics--but it's well-worn territory in Elseworlds stories and, of course, one of the central conceits behind any number of other superhero characters, to it's difficult to say "because this appears in the story, it's an adaptation of the New 52." The rocket that carried baby Kal-El to Earth (as depicted on the Action Comics covers by Andy Kubert) in the New 52 certainly looks like it may harbor a resemblance to some of the Kryptonian tech we've seen in the movie, so there's that. In particular, the scene in the trailer where Superman seems to be standing in a hangar area, the noses of the presumptive rockets very much resemble what we see at left. It seems unlikely, but possible, that we might see that Grant Morrison-style t-shirt and jeans Superman for a while in the movie, if only because before he ever gets the costume and a clue to his backstory, Clark seems to be carrying something with him all the time that bears the Superman logo/House of El crest. If he appropriated that right after he decided that a secret identity was needed, we might see a quick flash of that--although with an origin story to tell and what looks like a heck of a lot of action in the third act, it seems unlikely Zack Snyder is going to spend too much time on diversions of that nature.

Man of Steel: What Comics Are Influencing The Newest Movie Take?