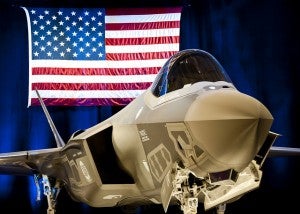 While Superman and the U.S. military may find themselves at odds at some point in the forthcoming Zack Snyder film Man of Steel, that's not to say that the Air Force isn't happy with the way they're being depicted in the film. That's the assumption, at least, based on reports that the F-35 Joint Strike Fighter, will appear in the film, marking the big screen debut of what Wired calls "the most expensive weapons program in human history." A stealth jet rolled out by Lockheed in 2011, the Pentagon arranged to have two of them towed onto the set when Man of Steel was filming at Edwards Air Force Base, where the F-35 happened to be present for test flights. "They liked the idea of having the most modern, the newest fighter aircraft in the background," says Phil Strub, the Pentagon's Hollywood liaison, who was reportedly on location for the shoot. Does the stealth jet look familiar? It could be that you've seen it before--or at least that you think you have. The Wired report says that while Man of Steel is the plane's first time actually being photographed for a feature film, "the F-35 had been digitally rendered in movies previously, including a scene in The Avengers when the Hulk tears it apart." "I don't think there are any plot points for the F-35," Strub says. "I think it's just background candy." The article adds that while the JSF had been considered as a candidate for Top Gun 2, those talks were cut short by the death of the film's presumptive director, Tony Scott, earlier this year.