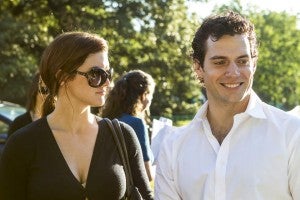 Could MMA star and actress Gina Carano, who recently signed to play the lead in an all-female interpretation of The Expendables, be making an appearance in Man of Steel as Wonder Woman? Over at Cosmic Book News, they've taken an awful lot of leaps in logic, but the underlying premise they're offering up is an interesting one. At an event sponsored by McLaren Automotive, Henry Cavill--who stars as Clark Kent/Superman in the upcoming Zack Snyder reboot--was spotted arriving with and escorting Carano around. Given that he just split from his fiancee, the gossip column types are almost certainly beginning to speculate as to whether the pair are "together." Given that Carano has long been a fan-favorite to take on the role of Wonder Woman in Warner Brothers's rumored adaptation of Justice League, those of us on the comics side of things are mostly wondering, as Cosmic Book News asked, where the pair might have met. Speculation that Wonder Woman might appear in Man of Steel is not simply idle hopes; the character is currently dating Superman in the comics--a relationship that may have been put in place by the people on Warner's movie side, who former Superman writer/artist George Perez said had much more influence in the month-to-month operations of the comics than they have in the past. With a Justice League script being worked on now, many fans are beginning to assume that Man of Steel will feature a post-credits sequence, not unlike what Marvel usually does to set up their next films, and that a League member would likely be introduced in it.