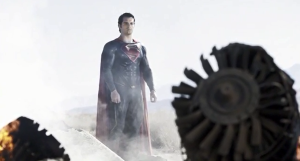 In a new featurette available online via a Sears-related YouTube page, Man of Steel writer David S. Goyer says that "Our approach was not a comic book Superman; it was just do a more realistic Superman--a Superman that exists in a real world." That, of course, is the Nolan approach in a nutshell and it's one of the consistent themes that we've been hearing all throughout production, albeit generally without using "comic book" as the antithesis of the objective. The video, embedded below, features brief interviews with Snyder's wife and co-producer Deborah Snyder, star Henry Cavill, Lois Lane actress Amy Adams and more. It also features some new footage and behind-the-scenes material dealing with Superman's big battle with Faora, which apparently takes place at least partially at Sears.

Deborah Snyder, in particular, addresses that, saying that part of crafting a world where it felt like the film's events could actually take place, was to use familiar locales and businesses, shooting on set and using familiar storefront settings to make it feel less artificial. Check out the video below; thanks to reader Jonathan for the link, which seems to be invite-only (as the video is probably part of the Sears Man of Steel Day promotion, which hasn't yet rolled out in full).

Man of Steel Writer: "Not a Comic Book Superman"