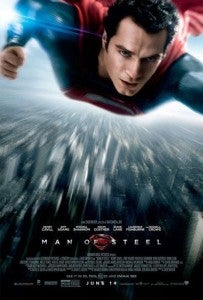 Warning: Spoilers ahead for Man of Steel, in theaters now.

In David S. Goyer's script for Batman Begins, the Dark Knight refused to intentionally take the life of Ra's al Ghul, electing to do everything he could to save the villain until Ra's himself chose to die. After the fairly cavalier way that Gotham's Caped Crusader had taken out one villain after another in the Tim Burton and Joel Schumacher films, comic book fans applauded Goyer and director Christopher Nolan for sticking close to the source material on an issue that had been given such importance by so many comic book writers over the years. Of course, as much or more than Batman, Superman doesn't kill. And that's kind of the sticking point as we discuss the death of Zod in the third act of Goyer's Man of Steel script. 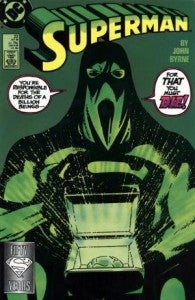 It was twenty-five years ago, as Superman turned fifty years old, that we dealt with this issue once before...and ironically, it was also General Zod and the Phantom Zone criminals who raised it. That's perhaps not surprising. For physical power, few villains rival Superman and those who do tend to be artificial life forms like Doomsday or Brainiac, who can sustain tremendous amounts of damage but are functionally immortal. Each time Superman does away with them, they return, skirting somewhat the issue of whether it was morally justified to kill the villain. In Zod's case, when he and his henchmen showed up alongside the reintroduction of Supergirl in the late '80s, Superman had to take it upon himself to execute the Phantom Zone criminals--a deed that caused him not-inconsiderable guilt, and led to a brief, self-imposed exile in space to clear his head. It's during that time that Superman first encountered The Eradicator, a Kryptonian artifact that would become a persistent story device for about a decade, even at one point gaining sentience and becoming a supporting character for a long spell. Certainly the anguished howl and the emotional break Superman seemed to suffer after being forced to kill Zod in the movie lines up nicely with that kind of storytelling--will this be a beat that Warner Bros. actually follows up in the sequel, though? Without Krypton (or the command key/Jor-El), the science fiction elements of Superman's backstory will be gone, so a jaunt into space might help to maintain a consistent tone across the two films. The introduction of The Eradicator would keep the Kryptonian threat present and accounted for as well, regardless of what villain is ultimately chosen. That's important not just for consistency of the film's message but also because it presents a challgenge that's difficult for Superman to overcome physically, forcing the writers to come up with creative ways for Superman to use his powers...and his brain. And--and this is circumstantial evidence, but evidence nevertheless--the storyline in question in the comics was not previously available. This week, it became available via ComiXology as part of the Superman 201 sale. In other words, someone at DC decided it was a story there would be some demand for--and they did so this week. Since the Man of Steel Prequel dealt with an ancient Kryptonian scouting expedition as well as Kara Zor-El, it wouldn't be surprising to see she and/or the Eradicator dealt with in the next film. This could be particularly logical if the codex built into Superman's DNA could be accessed and harnessed via The Eradicator or some other Kryptonian artifact to which Kara or Dev-Em (the killer who crash-landed on Earth with her) may have or have had access. There is, of course, a built-in conflict with doing the Exile in Space story. A couple, actually. First of all, without Supergirl being first introduced, it's difficult to imagine Superman just flying away after his deadly and destructive fight with Zod, leaving humankind without a guardian. It would send very much the wrong message. One of the great things about Superman is that he uses his powers to help clean up after his fights, making him one of the only superheroes who are clearly worried about the everyday people whose lives their battles throw into turmoil. Second, Brandon Routh in Superman Returns headed to the ruins of Krypton. Is ten years enough distance to put between that film and whatever comes next from Cavill and company? There's also the question of intelligent life outside of Earth and Krypton, something that Superman-on-film has never particularly dealt with. Would viewers be able to slip comfortably right into a mindset that allowed for some ancient, alien cleric to give Superman the Eradicator? It's hard to say.

Man of Steel's Controversial Big Finish: What Does It Mean?