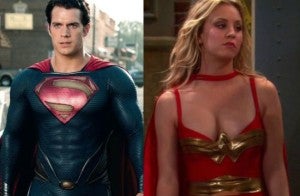 While we don't dip into celebrity dating gossip a lot at Comicbook.com, there are some stories that are just too big to ignore. Man Of Steel's Henry Cavill had been dating Gina Carano, who recently appeared in Fast & Furious 6. Cavill dating Carano had created much speculation that the two might have met on the Man Of Steel set, while Carano was filming a Wonder Woman cameo. Of course, Gina Carano didn't appear in Man Of Steel, so all the Wonder Woman cameo rumors were false. However, Gina Carano is still considered by internet speculators to be one of the leading candidates to play Wonder Woman. However, it will make for an interesting Justice League if Carano does land the Wonder Woman role, because Cavill and Carano reportedly split up in early May. Now, People Magazine is reporting that Henry Cavill is dating a new woman, which is sure to send comic book fans into a tizzy. Henry Cavill is 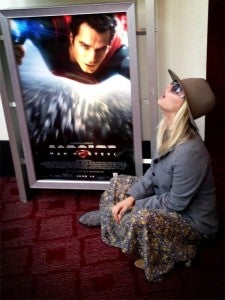 now dating none other than The Big Bang Theory's Kaley Cuoco. Of course, this new romance could also start speculation that Kaley Cuoco might be pursuing the Wonder Woman role. After all, Cuoco did appear dressed as Wonder Woman on an episode of The Big Bang Theory. On Twitter, Kaley Cuoco recently posted a photo of herself gawking at a Man Of Steel poster, along with the text, "Everyone go see 'man of steel'. It's fantastic in every single way." The paparazzi will likely be out in full force at 2013 San Diego Comic Con in hopes of catching the new power couple holding hands together.