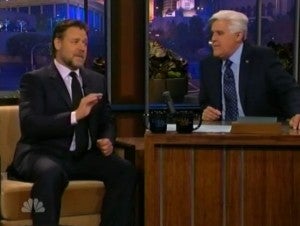 In an appearance on Friday's Tonight Show, Man Of Steel actor Russell Crowe recounted to Jay Leno a story about the first time he met Henry Cavill. Russell Crowe said, "In 2000, I was making a movie called Proof Of Life. And we shot just north of London in a school called Stowe. The scene was that my character was there to tell his son, who was played by a kid called Merlin Hanbury-Tenison…to tell him that I had to go away. I was a mercenary, you know, go away and do another job and wouldn't be around." Crowe continued, "They had a bunch of kids there playing a game of football, and Henry was one of them. And I was watching the kids playing, and there was one kid on that field that was just a dominant player. He was fluid, and he had control of what he was doing, so he kind of caught my eye. And between shots, that kid came over to say hello. And he was such a serious little insect, and he just wanted to talk about acting. And you can answer those questions a hundred thousand times, and you know it's pointless, because there's nothing shining in that person's eyes. But Henry's eyes just had a fire in them, and like he was really serious, so I took him seriously, and I answered him seriously. A couple days later, I was putting packages together, a package for the kid that played my son, because I figured if you're at boarding school the most exciting thing would be unexpected mail. So I put that package together, and I thought I'll put one together for that kid who came over as well." Crowe added, "And one of the things I put in there was a photograph from Gladiator that said, 'Dear Henry, The journey of a thousand miles begins with a single step, Russell." Russell Crowe said he worked out with Henry Cavill in the same gym preparing for Man Of Steel for three months before he realized Henry was the same kid that came over to talk to him. Crowe said he asked Henry what he said to him about acting, and Henry replied, "They pay you pretty well, but they treat you like [bleep]." As part of singing his contract with Warner Bros, Russell Crowe revealed he had to agree to get in shape. Warner Bros. wanted his character Jor-El to be a warrior, and they wanted him to look physically capable and strong. Russell Crowe said, "Part of the contract to, which was for three and a half or four months, something like that, you cannot eat any food other than that which Warner Bros. gives you." The Man Of Steel is scheduled to premiere in movie theaters in the United States on June 14, 2013.