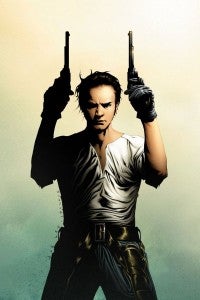 Russell Crowe, who plays Jor-El of Krypton in the forthcoming Zack Snyder Superman reboot Man of Steel, is reportedly now the frontrunner to take on the role of Roland Deschain in Ron Howard's film-TV hybrid adaptation of Stephen King's epic Dark Tower series. The actor's name is being mentioned now that Javier Bardem has dropped out of the project; he's previously worked with Howard on A Beautiful Mind. The plan at present is to tell the story through two feature films and three TV miniseries, all of which would interlock, but the budgetary commitment is substantial, and Universal has already backed off once, shortly after Bardem agreed in principle to join the project and it looked like things might be moving forward. This time, though, Howard, his producing partner Brian Grazer and their Imagine Entertainment have taken the project to Warner Brothers, who are losing a pair of their biggest franchises in the immediate future and could be on the lookout for another long-term investment. Deadline is reporting that a decision as to whether the project is effectively dead in the water or whether Warner will move forward with what Deadline describes as "one of the most daring and ambitious projects to come along since The Lord Of The Rings" will likely be made in the next two weeks. Of course, Warner just greenlit a third movie based on The Hobbit, J.R.R. Tolkien's Lord of the Rings prequel, which will be directed by Peter Jackson and star many of the holdovers from his Lord of the Rings trilogy. Whether this makes it more or less likely that the studio will commit to another similarly-ambitious franchise that could either tank horribly or take the reins from The Hobbit and The Dark Knight trilogy is unclear so far, but writer Akiva Goldsman is reportedly turning in a new script shortly that will be the basis for the decision. Warner Brothers is not only losing The Hobbit, but it's already recently lost the Harry Potter series and Christopher Nolan's Batman as summer tentpole franchises. Without another franchise or franchises to start in 2013 or soon thereafter, they may be looking at artificially-depressed box office numbers as they struggle to replace those franchise films with individual movies that don't tend to do as well as series do. In addition to nine novels by Stephen King (with a tenth reportedly on its way), The Dark Tower has inhabited a number of best-selling miniseries from top-tier talent at Marvel Comics including X-Factor's Peter David and Before Watchmen: Ozymandias' Jae Lee.

Man of Steel's Russell Crowe to Star in Dark Tower?