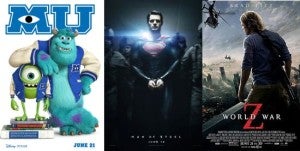 Last night we reported that box office forecasts had Man of Steel soaring from its original $40 million to $45 million projections and topping $50 million, marking what would have been the first time in box office history that three different films did so (the other two being new openers Monsters University and World War Z). It looks like things are settling back down, though, and that those initial estimates were more on target than early ticket sales indicated; Man of Steel was down from expectations yesterday and is now on pace to make around $43 million domestically during its second week of release, down around 60% from last week and more on pace with the original expectations for the weekend. The film will still have made more than $200 million domestically by the end of the weekend and depending on how things shake out in a number of markets might actually take the #2 overall spot internationally, but domestically it looks like World War Z will open at $63 million--up about 25% over the initial expectations of $45 to $50 million--and that segment of the box office seems to have come largely out of what was projected to be Man of Steel's share. That's perhaps not surprising; with two new films opening up in 3-D, Man of Steel was going to lose some screens in smaller theaters around the country. Like Iron Man 3 and Star Trek Into Darkness, the film is widely expected to have longer legs than most others, meaning that it will likely hold onto most of its screens for a longer theatrical run and remain in the top ten for a while...but the 3-D real estate is getting more and more precious these days.