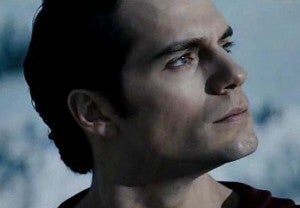 In the world of Man of Steel, Henry Cavill explains in a new interview with Details, Superman has spent a lifetime isolated by his abilities, struggling to keep the truth about himself private and so unable to really connect with people. "My version of Superman," Cavill said succinctly, "is essentially of a guy who has spent his whole life alone." The article details (no pun intended) a scene from the film wherein Clark is working at a bar, and a patron takes a swing at him after he tried to stop a group of truckers groping one of his co-workers. Feeling unable to retaliate, Superman has to lash out later, when nobody's looking, resulting in some property damage. It also says that Zack Snyder was so confident in Cavill as his choice for Superman that the actor was the only one screen-tested for the role (it probably didn't hurt that Warners was still pretty happy with the way he delivered on Immortals). "When I found out I got the part," Cavill told Details, "I was home playing World of Warcraft. Zack called, and I thought he was calling to let me down easy. But then it dawned on me that he was giving me the part. I had to play it cool. Be appreciative, respectful, professional. But the second we hung up, I just sprinted up and down my stairs cheering and whooping like a madman. I kept looking in the mirror, going, 'I don't believe it. I'm Superman? I'm Superman!'"

Man of Steel's Superman Isolated By His Powers