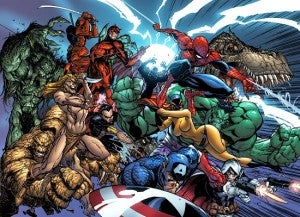 Marvel has filed a motion to dismiss Stan Lee Media International's multibillion dollar lawsuit against them for the rights to all characters co-created by Stan Lee, calling the suit frivolous and "flawed beyond cure." The case asks for $5.5 billion from Disney, which they claim to be owed as a result of revenue generated from films, licensing and merchandise coming from characters co-created by Lee, who purportedly signed over the rights to comic book characters he created or would create to the company he was then the co-chairman of in 1998. The bankrupt company claims that since Marvel never bought the rights to the characters back from them, that they did not own the characters when they sold them to Disney. "There is no conceivable basis on which Plaintiff can state a viable copyright claim against TWDC in this Court, or for that matter, any other," the Disney motion says. "In sum, against the backdrop of Plaintiff's six prior unsuccessful litigations on this topic, express judicial displeasure with Plaintiff clogging the courts with a repeated invocation of rights it does not possess, and the fact that TWDC conducts no business activities other than those of a holding company, this lawsuit is completely frivolous and should be dismissed." Lee, Jack Kirby (who co-created most of the characters with Lee as well as many of his own) and a number of other creators have tried unsuccessfully to obtain the rights to characters they created or co-created from Marvel over the years, and so it's unclear whether, even in a world where SLMI can prove Lee signed his rights over, any of the Marvel characters would have been his to sign over to begin with.