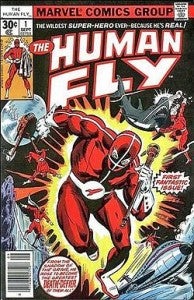 There are some heroes that may be considered below the radar of the collective public consciousness, and then there are those characters that make most people not familiar with comic books say "WHO??".  That could certainly be the case if plans to move ahead with a film adaption of the VERY limited Marvel series from the 1970s The Human Fly continue.  News outlets report that Paramount-based Eisenberg-Fisher has secured the rights to bring The Human Fly to the summer theaters of many confused and head scratching teens and adults. The nineteen-issue series focused on the exploits of stuntman Rick Rojatt. Sources indicate that the film version will be based on Joe Ramacieri, a real, live human who, according to the official website for the film, yep, you read that right, "wanted to do something big, become famous and never have to work in the family business."  There's an Evel Knievel feel to this, and it's not surprising, given that the 70s were the apex of Knievel's fame.  Steve Goldmann, known mostly for his work directing music videos, is said to be directing the project, with Tony Babinski writing the project.  Go ahead and click that link to the official site, I dare you!

Marvel's The Human Fly Soaring Onto the Big Screen?