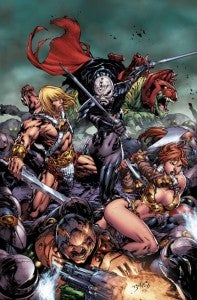 Jon M. Chu, director of G.I. Joe: Retaliation, has pulled out of the Mattel adaptation Masters of the Universe, The Hollywood Reporter claims. No replacement director has yet been named. The film will apparently undergo a rewrite from Terry Rossio, the co-writer of this year's mega-flop Lone Ranger. Chu is reported to be considering a third G.I. Joe film, so it's possible he didn't pull out because of problems and that the rewrite is routine, but this movie has been in development for some time and it certainly does seem like it may just never happen. Apparently going by the philosophy that guides "mature" takes on previously all-ages material like The Dark Knight and Man of Steel, the film was at one point called "Grayskull," according to the report. Previous reports have suggested that HBO's Game of Thrones will likely be an influence on the story, which revolves around a prince in a kingdom of barbarians whose magical sword transforms him into the world's most powerful warrior and fighter for good. He battles against an army of magic-enhanced freaks and monsters led by a villain called Skeletor. A previous feature film was made in 1987, starring Dolph Lundgren and Frank Langella. The film brought He-Man and company to Earth, where as the current draft, like the cartoons and comics, is set on Eternia, the home turf of the Masters of the Universe. Masters of the Universe is presently a digital-first comic book series by DC Comics, and Keith Giffen is working on a crossover between the characters and the heroes of the DC Universe.