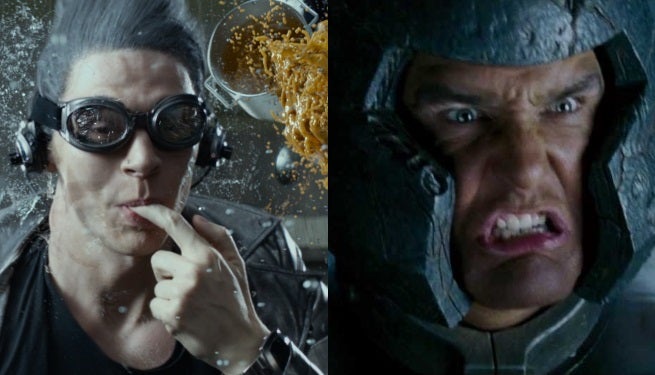 While the Quicksilver scene in X-Men: Days of Future Past is considered a highlight of the film, that wasn't always the case. Writer Simon Kinberg previously revealed that the first draft of the script had the Juggernaut aiding in Magneto's escape rather than Quicksilver, until director Bryan Singer nixed Juggernaut's inclusion becaues his powers had already been seen and explored in X-Men: The Last Stand.

That original script was co-written by X-Men: First Class director Matthew Vaughn, who was expected to direct the sequel before he dropped out to direct Kingsman: The Secret Service instead. While on the press tour for Kingsman, Vaughn finally shared his original vision for Magneto's escape scene.

"I had Juggernaut being thrown out of a plane at 20,000 feet," Vaughn tells Empire Magazine's podcast, "and using his head to go down a hole to get to the bottom of [The White House]...I had Beast saying, 'I have a plan,' and him replying, 'What's the plan? What's the plan?', and they go higher and higher and Beast was going to go, 'This is it!' and chuck him out the window. Then he goes smashing through [The White House] with his and Magneto goes, 'Who the f**k are you?'"

In the end, Vaughn concedes that Singer's Quicksilver scene was the superior vision, calling it "the best scene in the movie."

"I would have made the movie worse," he laughs. "The Quicksilver one was better."

Kingsman: The Secret Service is now playing in theaters.

Matthew Vaughn's X-Men: Days Of Future Past Quicksilver Scene Was Much Different Than Bryan Singer's