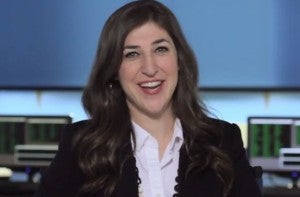 In a promotional tie-in between Gillette and the Man Of Steel, various celebrities have shared their theories on how Superman shaves. The theories have ranged from being simple explanations such as that Superman pulled a sharp piece of metal off his rocket ship to some rather complex explanations. In her video on how Superman shaves, Mayim Bialik delivers a rather complicated theory worthy of Amy Farrah Fowler, the character she plays on The Big Bang Theory. Bialik claims that progressive research in the field of Kryptonian genetics has developed a carrier for an enzyme which penetrates the skin releasing the hold on the hair follicle, which allows Superman to shave just like any other guy. The simple explanation is that Superman uses a special lotion to shave. Bialik calls here theory The Enzymatic Follicle Denaturation Theory. The Man Of Steel is scheduled to be released in movie theaters on June 14, 2013.