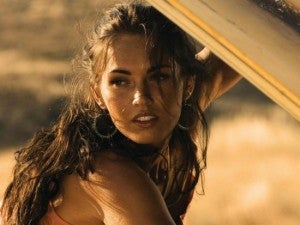 Transformers and Jonah Hex actress Mega Fox has joined Twitter. While celebrities joining Twitter is fairly common place, Megan Fox's recent addition to the social network is making headlines, because of speculation over why she joined. Just recently, Megan Fox was the victim of an Internet death hoax, which resulting in "RIP Megan Fox" trending on Twitter.  While Megan Fox did not state a reason for joining Twitter, many are speculating that she joined to prove to the world that she is still alive (and to be able to quickly shoot down rumors if they surface again). For her first tweet, Megan Fox said, "I'm incredibly late to the party but I'm here nonetheless, so what now?" Fox has amassed over 34,000 followers in a very short period of time, but she has yet to follow anyone herself. While Megan Fox is likely best known for playing Mikaela Banes in Transformers and Transformers: Revenge of the Fallen, she also played Lilah in the comic book movie Jonah Hex. On TV, Megan Fox was the voice on Lois Lane in the Robot Chicken: DC Comics Special, which aired in 2012.