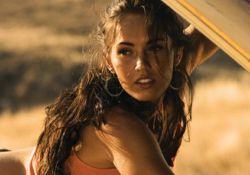 According to the Hollywood Reporter, actress Megan Fox is preparing to star in a pair of upcoming movies based on comic book series. Fox is in final negotiations with Warner Bros. and DC Comics to star in a feature film version of the Western comic, Jonah Hex. If all goes according to plan, Fox will play Leila, the gun toting love interest of the title character. Oscar nominee Josh Brolin will play Jonah Hex, a disfigured bounty hunter who roams the Old West.

According to the report, the movie will follow Hex as he tracks down a Confederate sympathizer, played by John Malkovich, who uses voodoo to raise an army of zombies in hopes of liberating the South. The film will start filming sometime in April. Horton Hears A Who director Jimmy Hayward will helm the project.

After filming for Hex is complete, Fox will then head underwater to act in and produce a live action version of the late Michael Turner's Fathom. The actress will play the character Aspen, a water-controlling member of a race of aquatic humanoids. Fox has been a fan of the comic since its inception in 1998 and will co-produce the film with former fianc e, Brian Austin Green of Terminator: The Sarah Connor Chronicles fame. Fathom has a tentative release day of 2011.

Megan Fox To Appear In Pair Of Comic Book Movies