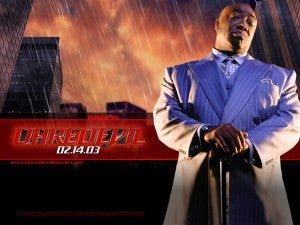 Michael Clarke Duncan, the iconic star behind films like The Green Mile and last year's Bones spinoff series The Finder, has died. He was 54. A representative for Duncan's fiancée, reality TV personality Omarosa Manigault-Stallworth, said in a statement that Duncan has passed away on Monday in Los Angeles due to complications from a July heart attack and that Manigault-Stallworth was asking for privacy in her time of mourning but that "celebrations of his life, both private and public, will be announced at a later date." Duncan was no stranger to comics--while most comic book fans will remember him for his iconic representation of Wilson Fisk, the Kingpin in the critically-reviled Mark Steven Johnson adaptation of Daredevil starring Ben Affleck in the title role, he also voiced a number of animated characters based on DC and Marvel comic books and starred as Manute in Frank Miller's Sin City. Over the course of his prolific, more than 15-year career, Duncan appeared in no less than six comic book adaptations, mostly where he would play or voice The Kingpin but also in Warner Television series like Static Shock and Teen Titans. Along the way he also starred in a number of genre works like Family Guy, Street Fighter: The Legend of Chun Li and Chuck. He recently starred as Kilowog in Green Lantern.