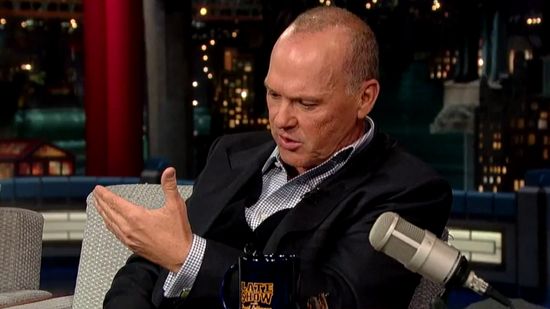 On Tuesday night's Late Show with David Letterman, Michael Keaton was one of the guests, appearing to promote Need for Speed. During his appearance, Letterman brought up that Keaton was in the film Multiplicity, which was directed by Harold Ramis, who recently passed away. In Multiplicity, Keaton played a man who had himself cloned repeatedly in order to help manage his busy life. In regards to Ramis, Keaton said, "One of the truly nicest guys you ever met, really good dude, really, really nice man." When Keaton was working with Ramis on Multiplicity, it was by the time that Ramis had embraced Buddhism. "That was a good thing, because I was really curious about it, and I would ask him a lot of questions about it, but he was really easy going," said Keaton. Then, Keaton relayed a story about how the filming on Multiplicty was really difficult, because he had to remember which guy he was playing. Keaton said it was a lot of work, planning, and discussion for everyone. Keaton said, "And one day I looked over at Harold, really easy going, and really bright. And I looked over, and Harold's just kind of like, and this was not an unusual thing, he was sitting in his chair going like this, reading something. And I thought maybe he had the script folded up or something. He was thinking and thinking. He was doing the New York Times crossword puzzle."