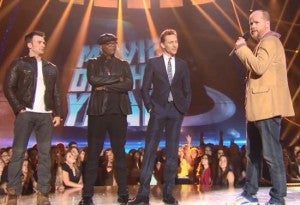 When host Rebel Wilson flew to the MTV Movie Awards in Iron Man armor for her opening segment, it was probably the first indication of how the night was going to go. An awards show that for many years has been the Twilight Awards Show for all intents and purposes quickly turned into The Avengers Awards Show. As much as Avengers star Tom Hiddleston was on stage, we're surprised that Aubrey Plaza didn't try to take one of his awards. The Avengers took home the Golden Popcorn for Best Fight, Best Villain, and Movie Of The Year. For Best Fight and Movie Of The Year, director Joss Whedon, Samuel L. Jackson, Tom Hiddleston, and Chris Evans all took the stage to accept the awards. For Best Villain, Tom Hiddleston accepted the award and delivered the most heartfelt acceptance speech of the night. Even though Robert Downey Jr. was in Paris at an Iron Man 3 event, his presence was still felt at the MTV Movie Awards, as MTV premiered both a new TV spot and an exclusive clip from Iron Man 3. We've embedded video of all The Avengers wins below.