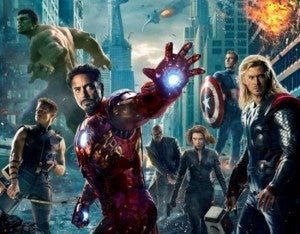 The five films nominated for the Movie Of The Year award at the 2013 MTV Movie Awards were The Avengers, The Dark Knight Rises, Django Unchained, Silver Linings Playbook, and Ted.  While the MTV Movie Awards usually favors blockbuster movies in the nominations, this year provided a rather unusual mix. Both The Avengers and The Dark Knight Rises were nominated, and they were the two highest grossing movies of the year at the U.S. box office. Ted was the highest grossing comedy of the year at the U.S. box office. While Silver Linings Playbook and Django Unchained were both successful at the box office, neither finished in the top ten grossing films of the year. However, both were well-received by critics and were nominated for Best Picture at the 2013 Academy Awards. The winner of the 2013 MTV Movie Awards Movie Of The Year was The Avengers. In accepting the award Joss Whedon said, "We're humbled to be standing here. No, we're not humbled we won."

MTV Movie Awards Movie Of The Year Is The Avengers

Hocus Pocus Star Reveals Why She Didn't Return for the Sequel