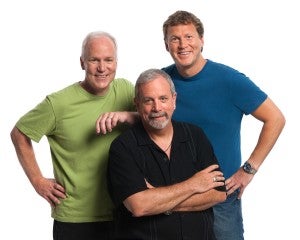 Mike Nelson, onetime writer and star of the cult sensation Mystery Science Theater 3000, announced today via Twitter that Rifftrax will take its turn with Manos: The Hands of Fate, widely regarded as one of the worst films ever made and (depending on who you ask) either one of the best or worst episode of MST3K. "I don't think it's even the teensiest exaggeration to say that this Rifftrax announcement will change all of history," teased Nelson and then linked to the YouTube trailer below. Manos: The Hands of Fate is a 1966 horror film which consistently rounds out the bottom 100 of IMDb's all-time rankings as determined by users. Mystery Science Theater 3000 reveled in such pablum, and made a name for itself (and a successful 11-year run that began on public access and ultimately rose to Comedy Central and the Sci-Fi Channel) by providing concurrent running commentary with terrible films. For the most part, the movies they selected were low-budget, out-of-print movies which often saw interest surge as a result of being featured, even negatively, on the show. Rifftrax is composed of Nelson, Bill Corbett and Kevin Murphy, a trio of former writers and performers from Mystery Science Theater 3000 who do basically the same thing as MST3K, but on the Internet instead of TV--and often lampooning much larger movies since they don't have to clear the multimedia rights. While home video rights have often made official releases of Mystery Science Theater 3000 material impossible, Rifftrax sidestep the issue entirely by selling MP3 files containing only the Rifftrax performers making fun of the movies, rather than the official audio and video. For a nominal fee, users can buy the Rifftax file and then play it over the "real" audio of a DVD or streaming movie acquired from other retailers and video rental services. Recent releases include Captain America: The First Avenger and The Twilight Saga: Breaking Dawn Part 1.