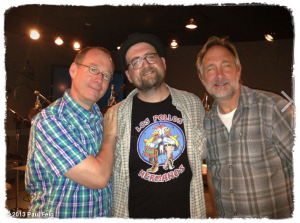 Joel Hodgson, Trace Beaulieu and J. Elvis Weinstein, best known to Mystery Science Theater 3000 fans as Joel, Crow T. Robot and Tom Servo, will reunite on the commentary track to The Heat, the fim's director Paul Feig reported via Twitter. "MST3K's @TraceBeaulieu, @JElvisWeinstein & Joel Hodgson just recorded a commentary track for #TheHeat DVD! #comedyheaven," tweeted the director, along with the photo at right of the men. All three of the performers were eventually replaced on Mystery Science Theater 3000, and while most of the actors involved with that series still do similar work (usually with Rifftrax or Cinematic Titanic) it's rare to get them together for something they don't own these days. The Heat has done well at the box office and is on track for a sequel. In spite of being a fairly middle-of-the-road comedy, Feig has embraced fanboy trappings like a Mondo poster and now MST3K. Don't be surprised to see Sandra Bullock and Melissa McCarthy promoting future installments at Comic-Con.