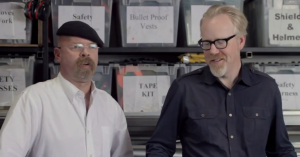 Jamie Hyneman and Adam Savage, the special effects wizards behind the hit Discovery Channel series Mythbusters, provide fans with our personal favorite theory so far on how the Man of Steel shaves. Having discounted bolt cutters and/or using super-speed to simply pluck his face with tweezers as impractical options, the pair briefly considered Superman flying very fast around the world at ultra-low altitude, essentially using the planet's surface to grind his facial hair off. What they eventually landed on, though, was the large hadron collider, which they suggested could be used (at preposterous expense) to send superman's stubble through wormholes, where they could float (mostly) harmlessly in space. Which, of course, begs the question of whether the hair would become less invulnerable once it encountered a system with a red sun... Check them out below.

Mythbusters Stars: Man of Steel Shaves With a Wormhole