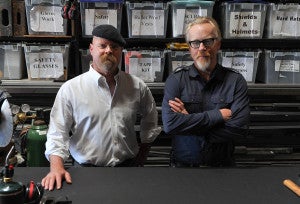 Adam Savage and Jamie Hyneman might not have the same background in theoretical science that Mayim Bialik or Bill Nye do, or the long professional history with Superman that Kevin Smith does. What they do have, though, is decades of hands-on experience  making the improbable happen--first as special effects artists in Hollywood and then as the hosts of Mythbusters on the Discovery Channel. If you've seen their show, it's arguably not surprising that theirs was the most hilariously clever of the four videos Gillette released earlier this month speculating as to how Superman might have got rid of his beard in Man of Steel. If you need a refresher, you can check out the video embedded below: 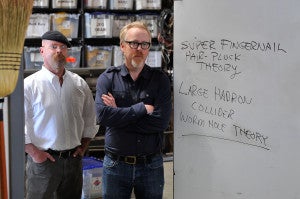 Savage and Hyneman joined ComicBook.com for an interview to discuss Man of Steel, Mythbusters and, of course, shaving. You can catch the guys on Mythbusters Wednesdays at 9 p.m. EST on Discovery. ComicBook.com: I saw Bill Nye at the World Premiere for Man of Steel. Did you guys make it out to New York, as well? Adam Savage: Unfortunately no, but I was able to see the movie last night with my kids. I really, really enjoyed it. I can say without reservation it was fantastic and the movie really delivers on what the trailers are promising--which is good because I was getting really excited about it based on the trailers. ComicBook.com: So what are the odds we're going to see you guys try and do one of your movie-specific Mythbusters episodes for Man of Steel? 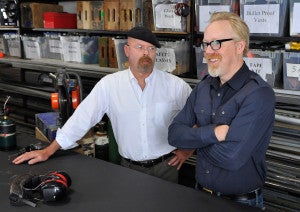 Savage:Man of Steel is a tough one because everything about it is fictional, you know? It posits this kind of whole extra branch of physics. And when you're dealing with extra-Earth physics, it gets very difficult to get a handle on something earthbound that you can use to compare or to test against. Never say never; we both love Superman so it would be fun to weave him into the show. ComicBook.com: That's actually what I noted about Mayim Bialik was that she embraced the crypto-science in the film and basically said, "Well, the existence of Kryptonians means there will be whole new areas of study." Everybody else approached it from a "real-world" methodology. Was it important to you guys to have something that you could kinda/sorta prove? Savage: You know? I don't think we were restricting ourselves to something that we would consider something we could tackle on the show. It's always a little fraught when a huge corporation, especially one as old and long-standing as Gillette, approaches you becuase we're always terrified someone's going to go, "We need you to bust a myth about our product!" So for us it was really refreshing that Gillette had come to us with such a really fun challenge to just sort of think through how Superman might shave. We didn't restrict ourselves to something that we thought we could test; we sort of let our minds wander free and that made it really, really entertaining. 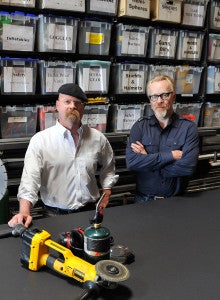 ComicBook.com: How did you guys come to be involved with this campaign? The choices seem inspired but I have no idea how Gillette came to those decisions! Jamie Hyneman: Yeah, we don't really know. Savage: I assume that we were the very first people that they thought of, and that they went down from there! [Laughs] ComicBook.com: You guys obviously have more hands-on experience than anybody else. Was it fun for you guys to be able to stretch a bit and come up with a theory that, even if you're based on sound science, is pretty much impossible to test? Hyneman: Yeah, absolutely. I mean, we're--if I may say so--we're experts at using materials and processes in ways for which they were never intended. So obviously-- Savage: --If anyone's going to break the warranty on the Large Hadron Collider, it's going to be us! Hyneman: There you go. Savage: You know, also for us over the years, the particular thing that we like most about doing what we do isn't blowing stuff up. It really has to do with taking a look at a problem than you've never encountered before, that you have no experience with, and starting to ask questions and starting to tease away at pieces of it until you feel like you've got a metric that you can use as a handle to sort of shake the thing around. For us, that process has been the one that's been the most surprisingly invigorating over the last ten years. That process has really been codified for us and to get asked to think about something as fanciful as how a fictional character from a fictional planet shaves his fictional beard, it's really entertaining because it's the same kind of thing. It's something that we have no practical experience with, so you just kind of shake that tree and see what comes out. We're both tickled about our idea--about both the Large Hadron Collider and about the idea that he might use his super-fingernails to pluck his beard hairs out one by one. ComicBook.com: It seems to me that so much of Mythbusters is premised on thinking outside the box, since if there was a simple answer to the questions you're tackling there wouldn't be a show. It seems to me you're uniquely suited for something like this. 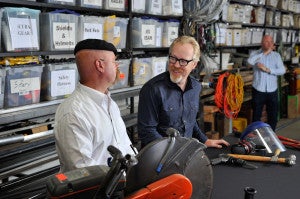 Hyneman: Yeah, well I mean take your pick of anybody that's in the media these days and who would you expect would be the most likely to actually be successful at shaving Superman's beard? I'm just saying it would have to be us, right? Savage: I also dispute the idea of "outside the box." I think that we're never thinking, "What is an uncommonly interesting solution to this problem?" We're always just thinking, "Well what's another solution? What's another solution? Usually in contrast to each other. One will come up with an idea and the other will go, "Well, that wouldn't work, what about this?" and the first one will go, "Well that wouldn't work, what about this?" and like two dogs on the same piece of rope we tug it back and forth until we've got something pretty fine. I actually think that that mode of inquiry ends up becoming un-self-conscious and a deeply creative act. So for us, that's again why I think that over the years we've grown to enjoy that process more than any other single thing. ComicBook.com: You guys have been at Mythbusters for a while now--take away Superman and what's the strangest, most fanciful thing you think you've done? Hyneman: Ohh... Savage: Well, you know there's fanciful of like doing weird things like hand-feeding octopuses to see if their eggs can grow in your stomach but then there's fanciful of like places we shouldn't have gone, like testing pyramid power. That is the very definition of fanciful. And you know, we're earthbound. We like staying grounded within things we can actually test and get our hands on; that's where our wheelhouse is. Hyneman: And yet there are a lot of physical things that we've done that, while I wouldn't call them stunts, they've pushed the limits of physics in a really interesting way. Adam has been dropped off of a building wrapped in bubble wrap to protect him. An episode that aired just a couple of weeks ago, I rode across a lake on a motorcycle. Just by going fast enough, you can ride on water with a motorcycle... Savage: Which is sort of like a superpower. Hyneman: Yeah! There's all sorts of things that we do like that and have had the opportunity to do over the years that are--in fact, that's one of the things we relish. There are things that you would think were not possible, and yet they are. ComicBook.com: With Superman, as you thought about this, is there another aspect of this character that you'd have liked to try and puzzle out? Savage: Well, actually because the superpower to fly is the one I'm most envious of, I would really like to find out really how good your reaction time would be flying at super-high speeds or could you accidentally fly through a building because you weren't paying attention? ComicBook.com: And that's one of those things that's dependent on his own physics, too. I mean, you can only fly that fast if you also have telescopic vision. Savage: Exactly! Everything's dependent on being Kryptonian and since we don't have any of those it makes it difficult to test on a practical level but it doesn't make it any less fun to think about on a problem-solving level. ComicBook.com: If you guys were faced with this problem, how would Hyneman shave? I've never seen you without your impressive facial hair. Hyneman: Well, it sort of has a life of its own. I pretty much learned not to fight with it a long time ago and let it do what it likes to do. Otherwise, my shaving techniques are pretty mundane.  I tend to do it in the shower because it makes the bristles soft and keeps the razor from building up the hairs inside it, and the mustache is dealt with with scissors.

Mythbusting the Man of Steel With Adam Savage and Jamie Hyneman