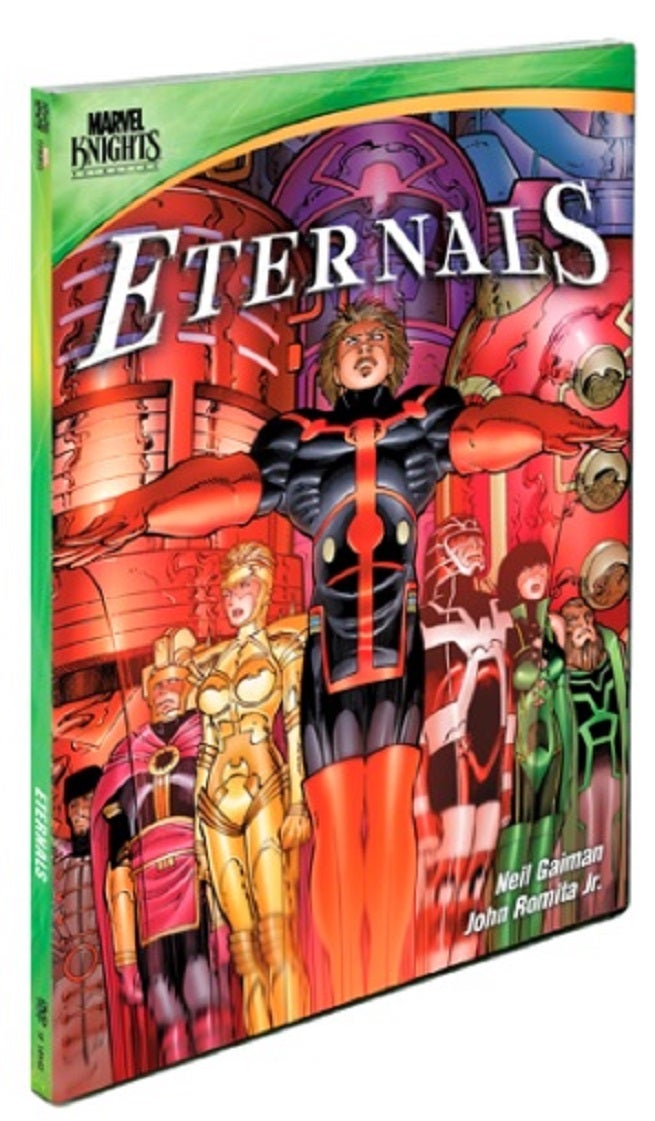 Romita provides a look-back commentary on the disc, which be packaged in a cardboard oversleeve reminiscent of the comic itself.

Here's how Shout! Factory, who distribute the discs, describes the release:

You are thousands of years old. You have amazing powers. You have watched civilizations rise and fall. So why don't you remember any of this? Best-selling author, Neil Gaiman (Marvel: 1602) is joined by superstar artist, John Romita Jr. (Amazing Spider-Man), to bring you the extraordinary tale of the Eternals. Medical student Mark Curry's world is turned upside-down when he meets Ike Harris, a man who believes that he's part of a centuries-old race of super-powered beings put here on Earth by aliens to preserve and safeguard the planet – and even crazier, tries to convince Mark that he is one too. On September 16, 2014, Marvel Knights Animation's ETERNALS DVD debuts for the first time on home entertainment shelves from Shout! Factory.

This highly anticipated Marvel Knights Animation release boasts unparalleled storytelling combined with rich visual animation and an exclusive behind-the-scenes bonus feature that provides an intimate look at the development of this amazing story. This deluxe DVD is collected in a unique comic book style packaging that bridges the comic book to DVD concept.

Marvel Knights Animation remains true to the heritage of panel-by-panel graphic storytelling, boasting groundbreaking illustrations, sensational soundscapes, and of course, the explosiveness of the mighty Marvel Universe. Behind every image and every word lies the genius of Marvel's celebrated creators.

You can order the DVD online or buy themm at Wal-Mart retailers in the U.S.