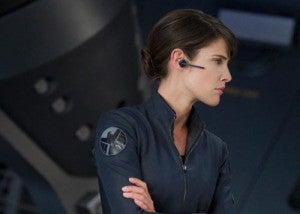 Appearing on The Late Show With David Letterman last night, How I Met Your Mother star Cobie Smulders brought a brief clip with her that showcases an interaction between S.H.I.E.L.D. Agent Maria Hill and Director Nick Fury (played by Samuel L. Jackson). The scene appears to show a fundamental disagreement between Hill and Fury regarding "the tesseract," which if you'll remember is what they call the Cosmic Cube in the Marvel movie universe, and what might happen if it blew up. The Cosmic Cube, which was the MacGuffin in Captain America: The First Avenger, appeared to be disabled at the end of that film but appeared at the end of Thor in the hands of S.H.I.E.L.D. While Thor was released before Captain America, the latter film too place primarily during World War II, meaning that Thor is the most recent Marvel Studios film in terms of establishing a timeline. Thanks to Bleeding Cool for pointing it out.