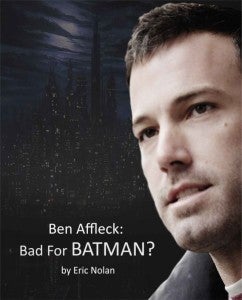 When Warner Bros. announced that Ben Affleck had been cast as Batman, it certainly created a lot of debate on the Internet. Batfleck trended on Twitter for several days, while fans launched petitions demanding that Warner Bros. remove the actor as Batman. Now, someone has written a whole book about the Ben Affleck as Batman casting controversy. "Ben Affleck: Bad for Batman?" is a 31 page e-book, which promises to provide a "controversial, compelling, and completely unauthorized inside look at the astonishing – and some say absurd - casting of Ben Affleck as Christian Bale's replacement in the legendary Batman film franchise." According to the Amazon description, "Ben Affleck: Bad for Batman?" offers "exclusive details gleaned from Hollywood insiders to a comprehensive debate of what Affleck may do for – or to – the role of Bruce Wayne." "Ben Affleck: Bad for Batman?" is written by Eric Nolan, who we're assuming is probably no relation to Dark Knight trilogy director Christopher Nolan. Of course, we had to avoid the temptation of writing the headline "Nolan Writes Book Questioning If Ben Affleck Is Bad For Batman," but we're sure someone will use that headline. The book lists Sports Entertainment Publishing as its publisher, which you might recall is the same publisher behind "Christian Bale: Beyond Batman," which claimed that Christian Bale was facing extraordinary pressure to reprise his role as Batman. "Christian Bale: Beyond Batman" made headlines because it mentioned someone speculating that Bale could make $50 million to return as Batman in a Justice League movie, which some in the press misquoted as being an actual $50 million offer from Warner Bros. for Christian Bale to return as Batman.

New Book Asks If Ben Affleck Is Bad For Batman