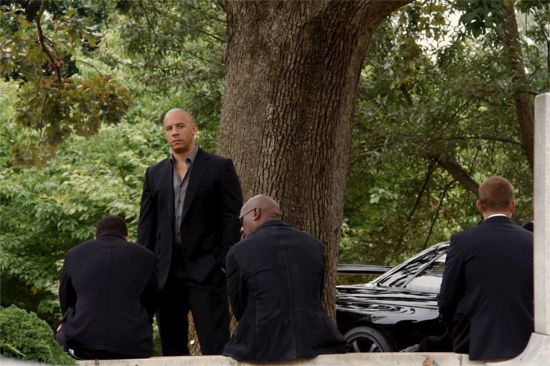 Vin Diesel continues to share photos from the set of Fast & Furious 7 with his Facebook fans. Along with releasing the photo above, Vin Diesel wrote, "The first week of filming, has been both intense and surreal...P.s. One from set... a more somber moment in Our Saga..." The photo shows Vin Diesel facing the camera, along with the backs of Paul Walker, Tyrese Gibson, and someone else. So what exactly is the reason behind the somber moment? Is Vin Diesel explaining to his friends who Groot is in Guardians Of The Galaxy? Or more than likely, given the after-the-credits scene in Fast & Furious 6, they are probably at the funeral of one of the members of their Fast & Furious family. Fast & Furious 7 is scheduled to be released in movie theaters on July 11, 2014.