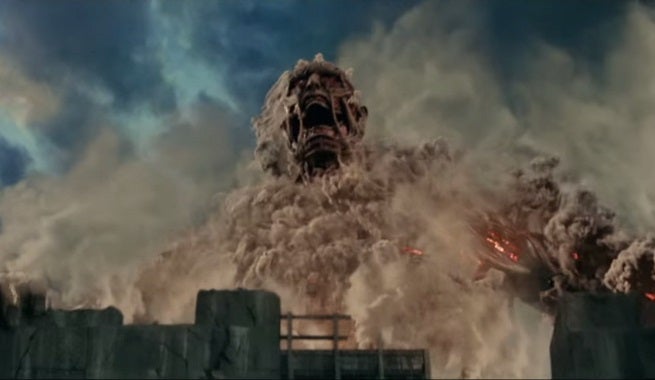 A new trailer for the Attack on Titan live action movie has been released online.

Here's a translation from ANN:

Narrator: Most of humanity was consumed by the Titans who suddenly appeared.

Narrator: The survivors of the war with these Titans erected giant walls three layers deep and kept the peace.

Narrator: But today, our invulnerable security no longer exists.

Voice: The rumors were true.

Kubal: Why don't we take back the plundered city? To carry out this honorable operation, we offer our hearts!

All: We offer our hearts!

Mikasa: The world is cruel

Text: Why did the Titans appear…?

Voice: I want to know the truth about this world!

Voice: If we fail, humanity is doomed.

Text: Why does humanity fight…?

Text: Is this world cruel?

Mikasa: We were together, always.

A shorter version of the trailer was also released, seen below.

The Attack on Titan movies will be the first Japanese films to offer a 4D experience, using 4DX or MX4D to incorporate motion seats, scents, and wind into the theatrical experience.

The Attack on Titan live action movie will release Aug. 1, with Part II following on Sept. 19.