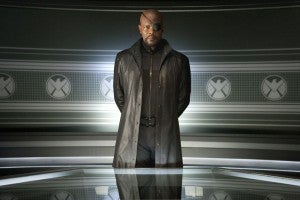 Samuel L. Jackson, star of Marvel's The Avengers, is trading on his aggressive, foul-mouthed public persona in a new ad for President Barack Obama's re-election campaign. The ad, a parody of his audiobook recording of Go the F--k To Sleep, urges voters to "Wake the f--k up" and head to the polls to support the President. The star recites the children's book soundalike monologue that includes passages like:

"In the silvery moonlight that bathes every town, The people lye dreaming so safe and so sound. They're warm in their beds, snuggled up in their sheets, But four years before, they were out in the streets."

Funding for the video came from the Jewish Council for Education and Research, a super PAC that supports Obama. The group is also responsible for a Sarah Silverman video that went viral last week questioning the validity of voter ID laws being passed in a number of swing states that opponents claim target unpopular groups and make it more difficult for them to vote.