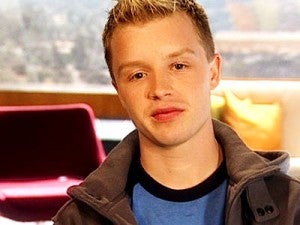 Noel Fisher, who starred in The Twilight Saga: Breaking Dawn Part Two and was just announced as cast in Ninja Turtles, is going to have a lot of comic book fans Googling his name today. That's because CBM is reporting, based on a tweet from longtime entertainment journalist Jeff Sneider at Variety, that in addition to playing fan-favorite Teenage Mutant Ninja Turtle Michaelangelo in Michael Bay's upcoming reboot of the property, the actor might be in line for Josh Trank's Fantastic Four as well. "There goes the Noel Fisher scoop I've been holding for 2 weeks," Sneider reported, presumably referencing his site's ongoing battle to be first on big news with Deadline, who broke the Ninja Turtles news. "It's NOT the only big role he's being eyed FOUR.." With a high-profile Fantastic Four reboot on the horizon, a number of sites, not surprisingly, assumed that's what Sneider was suggesting. But when somebody linked him to one of the stories on Twitter...

Hmm...seems that's a no-go, unless he's just referring to the casting speculation, made in the linked story, that Fisher could play Johnny Storm...but it's hard to picture him playing any other major role in that particular film, so it looks as though this particular rumor is being quashed by the very guy credited with putting it out there before it really gets a chance to find its footing. One fan also speculated that Sneider could be hinting that Fisher could be cast as Four in Divergent, but last we checked that role was already filled by Bedlam star Theo James.

Ninja Turtles Star Being Considered for Fantastic Four? Not So Fast...