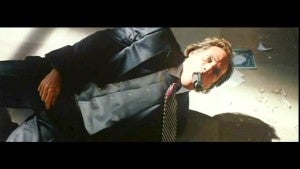 Given that his role was as-yet-unrevealed, many fans and members of the entertainment press had already assumed that Go and The Dark Knight star William Fichtner might be playing the villainous Shredder--but the studio had remained silent on the matter. Well, whether they're ready to come forward with it or not, Fichtner today told The Huffington Post that was indeed the case. He left no room for interpretation. "I play Shredder," he told them. "It is cool. It's one of those things that came along where I thought, 'Really? Let me think about this for a minute.' [Laughs] Then I was like, 'Yeah, OK, this sounds like a journey.' I'm very glad that it worked out, I'm really glad that I'm doing it." Interestingly, the article toggles back and forth between calling the Michael Bay-produced film "Ninja Turtles" and "Teenage Mutant Ninja Turtles," so no help figuring out what the current status of the on-again/off-again name change is.