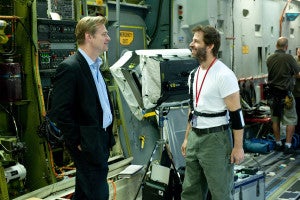 Jeff Robinov, the Warner Bros. motion pictures group president who recently projected that Man of Steel will be the highest-grossing film in the studio's history, has resigned his post at the studio amid frustration with upper-management. It sounds as though the writing may have been on the wall for Robinov; Deadline reports that the executive was waiting in vain for a new contract from Warner Bros., as his is expiring at the end of the year. "Witnesses tell me that on the LA to NY plane trip to the Superman premiere June 10th, [Warner Bros. Chairman Kevin] Tsujihara sat for the five hours not saying a word to Robinov who was sitting opposite him," said the report. "This cruel behavior was in full view of not only Robinov's execs but also of filmmakers like Christopher Nolan whom Robinov had brought to the studio." Tsujihara is fairly newly-installed and has been considered a good sign for DC Entertainment, a part of the company that he's historically shown a great deal of interest in. It was reportedly Tsujihara who helped spearhead DC's earliest attempts at digital comics. "I'm constantly being marginalized. My job is shrinking day-to-day," Robinov is quoted as saying. "Kevin is starting to push me out by both the things he's doing and the responsibilities he's assuming. It'll end up with everyone reporting to him. The result is that people at the studio are wondering how they can benefit from this or how they can not get hurt by this. Sitting around is not something I can do, or, by the end of the year, the studio will be in a massive mess." It may be interesting to see how this plays out for Man of Steel producer Christopher Nolan, who has been with the studio since Batman Begins. As noted above, Robinov brought him in and also supported him creatively throughout the Dark Knight Trilogy as well as Man of Steel, helping to sell Zack Snyder as the director for the project in spite of an up-and-down box office history. Says Deadline, "As a measure of his loyalty to Robinov, Nolan recently insisted that the studio be included in the deal for Interstellar at Paramount." Academy Award-winning director Ben Affleck, once rumored to be attached to the Justice League film, had kind words for Robinov, who has supported his work at the studio as well. "I don't know what I would do if Jeff weren't there. I don't know from my view anyone else there who knows how to make movies," Affleck said of Robinov, who reportedly hand-picked him to direct Argo after George Clooney's deal expired at Warners. "I would like to support him. So many places are filled with frustrations and run by people who haven't been sure-footed or have the right taste. Hopefully, it's about taste. Not everybody has it. Picking Zack Snyder was not obvious. Being able to take risks and make decisions not supported by conventional wisdom. Studios have the power and don't often cede the power to the director."