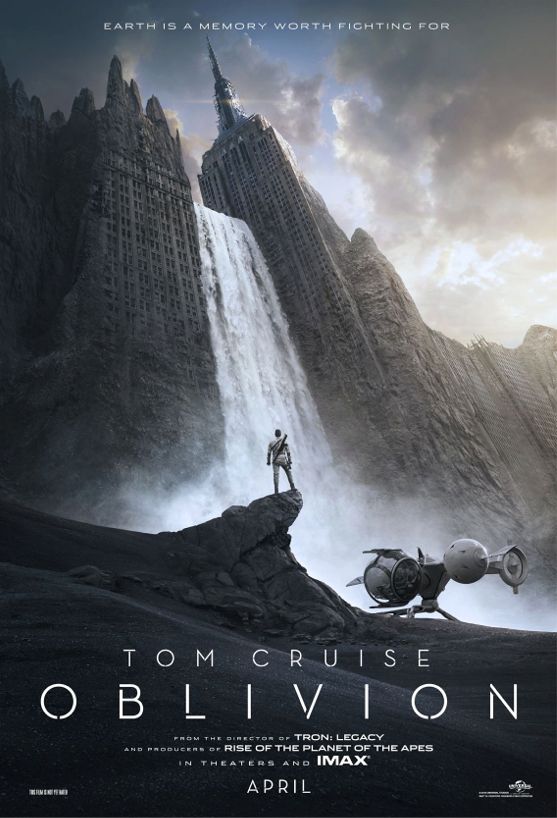 won't be the only sci-fi movie trailer that fans get to see this week. The first trailer for Oblivion will premiere on iTunes Trailers on Sunday, December 9, 2012. In addition to being released on iTunes, the trailer will also reportedly air in front of Jack Reacher and The Hobbit: An Unexpected Journey. In the meantime, Universal has released the very first poster for Oblivion to tide fans over. Interestingly enough, the Oblivion poster also spotlights buildings and a man's back just like the Star Trek Into Darkness poster. However, in the Oblivion poster, the man (which we assume is Tom Cruise) is dressed in white instead of black. Here is the synopsis for Oblivion. "Tom Cruise stars in Oblivion, an original and groundbreaking cinematic event from the director of TRON: Legacy and the producer of Rise of the Planet of the Apes.  On a spectacular future Earth that has evolved beyond recognition, one man's confrontation with the past will lead him on a journey of redemption and discovery as he battles to save mankind. Jack Harper (Cruise) is one of the last few drone repairmen stationed on Earth.  Part of a massive operation to extract vital resources after decades of war with a terrifying threat known as the Scavs, Jack's mission is nearly complete. Living in and patrolling the breathtaking skies from thousands of feet above, his soaring existence is brought crashing down when he rescues a beautiful stranger from a downed spacecraft.  Her arrival triggers a chain of events that  forces him to question everything he knows and puts the fate of humanity in his hands." Oblivion is set to be released in IMAX on April 12, 2013 and in regular theaters on April 19, 2013.