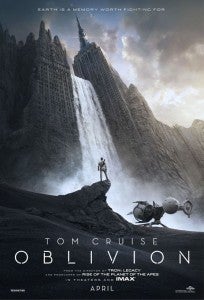 One of the pleasant surprises of the pre-Christmas trailer release party was the first trailer for Oblivion. While Oblivion really wasn't on our radar before, a very well done trailer caught our attention. In a video with IGN, director Joseph Kosinski talked through a ten minute analysis of the Oblivion trailer. While he wouldn't explain everything, Kosinski did offer plenty of inside information. Kosinki points out that Tom Cruise's character Jack Harper is fascinated with the world that existed before the war, which is showcased by him wearing a New York Yankees cap. Kosinki also lets slip that the Scav invasion started in 2017. However, Kosinki refuses to reveal who or what the creature that looks like Darth Vader is. Oblivion is set to be released in theaters on April 19, 2013.