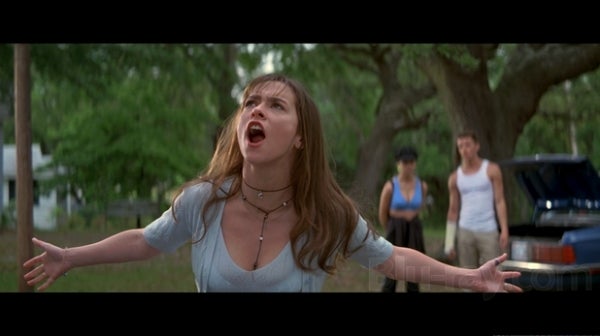 Oculus co-writer/director Mike Flanagan and partner Jeff Howard are adapting the 1997 hit I Know What You Did Last Summer for Sony, Deadline reports.

The film, which spawned two sequels over ten years and became an ironic catchphrase for a while, is based loosely on a 1973 novel with inspiration from the urban legend of "The Hook."

Deadline predicts that the film could be made fairly inexpensively to increase the potential for a hit; while the first I Know What You Did Last Summer made over $125 million on a fairly modest budget, the franchise had devolved into direct-to-DVD status by the time 2006's I'll Always Know What You Did Last Summer hit. That it will have been ten years since that movie came out by the time the new version hits theaters means audiences (especially the younger audiences who often go for this kind of movie) will have a lot of distance from any positive impressions. Oculus was made for less than $15 million and generated more than $40 million -- which seems to be the way to go for a lot of recent horror/slasher films, which are having a hard time competing with PG-13 blockbusters for the 3D and IMAX screens that boost the box office.

The first film, which came from Kevin Williamson of Scream and Dawson's Creek fame, starred a group of teens, played by actors who would all go on to varying degrees of major success (the least-recognizable of them is Bridgette Wilson, who also appeared in Mortal Kombat before becoming much less visible in show business following her marriage to tennis superstar Pete Sampras). Familiar faces from the film include Jennifer Love-Hewitt, Ryan Phillippe, Sarah Michelle Gellar, Freddie Prinze, Jr. and Anne Heche.

Producer Neal H. Moritz, whose films include the Fast and Furious and 21 Jump Street franchises, is financing the reboot.

Oculus Director to Reboot I Know What You Did Last Summer