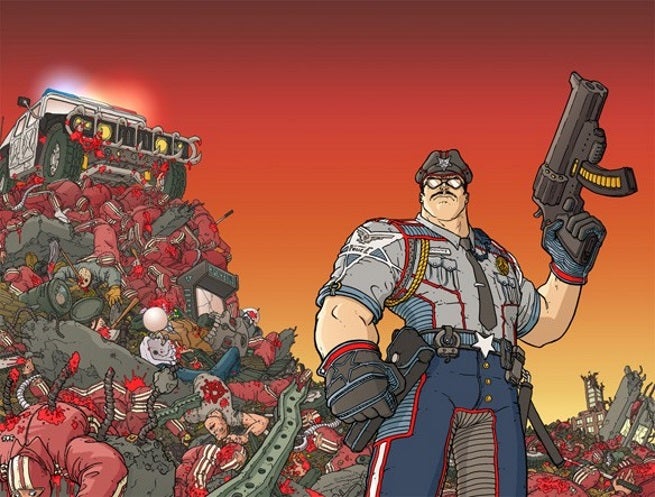 The much-anticipated film adaptation of Joe Casey and Chris Burnham's Officer Downe has added four new names to the cast.

Man of Action Entertainment, the same studio working on the I Kill Giants film and a key player in developing the Academy Award-winning Big Hero 6, have cast Zombieland's Tyler Ross as Officer Gable opposite previously announced lead, Kim Coates, in the independent film that began principal photography this week in Los Angeles.

"We couldn't have asked for a better group of actors here. They way they're all bringing the thunder, we're absolutely gonna melt brains with this flick," said Casey.

Officer Downe is based on the graphic novel written by Casey and illustrated by Burnham released on the Man of Action imprint at Image Comics. It tells the story of an LA supercop routinely killed in the line of duty, but who is repeatedly resurrected and sent back out onto the streets.

Man of Action Entertainment is comprised of creators and acclaimed comic book writers Joe Casey, Joe Kelly, Duncan Rouleau and Steven T. Seagle, having collectively worked on the largest franchise characters in comics from Superman to X-Men before refocusing on creating worlds and characters for their own original work published through their Man of Action imprint at Image Comics. They also created cult favorite series Generator Rex for Cartoon Network, and are co-executive producers and writers for Marvel's Avengers Assemble.

Upcoming projects based upon other Man of Action creations include The Great Unknown, KAFKA, I Kill Giants and The Crusades. Voltage Pictures is repping the film internationally.