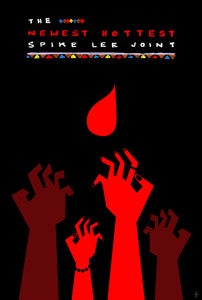 During an "Ask Me Anything" forum last night on Reddit, acclaimed filmmaker Spike Lee, appearing to promote a Kickstarter campaign to fund his next film, fielded questions from fans (and a healthy number of detractors) about his films, his politics and--more than you'd think--the Knicks. With Lee directing a "re-envisioning" of the beloved Park Chan-wook film Oldboy and his next film centering around "human beings who are addicted to blood," it seems as though the filmmaker--best known for his urban dramas--is gravitating toward more genre fare these days. That's an impression he repeatedly affirmed, telling fans who asked that he would like to do more larger-than-life content like musicals and science fiction films. "I would love do an Octavia Butler novel one day," Lee told one fan who pressed for details. Butler, who died in 1996, was an acclaimed and best-selling science fiction writer and arguably the best-known black woman in that field. She was also the first science fiction writer to receive the MacArthur Fellowship (the "Genius Grant"). Lee also said he'd be interested in taking on a slave drama, so Butler's 1976 novel Kindred might be worth a look for his fans: In it, an African American woman is transported from then-modern-day Los Angeles to early nineteenth century Maryland, where she meets her ancestors: Rufus, a white slave holder, and Alice, an African-American woman who was born free but forced into slavery later in life. With all this talk about science fiction, though, someone asked what is the obvious question in Hollywood these days--whether he would want to make a superhero movie. Lee's answer was...characteristically Lee. "I did," the director said. "Malcolm X....He didn't wear tights or a cape. He didn't fly through the air or transform. Yet he was considered that he had too much power for one man."